Back when I was younger and the wonders of cable television’s future were being extolled across the land by paid lobbyists—back before most people even realized that’s what was happening, instead we would have assumed it was just the way of the best futures to announce themselves above the rest, in the American way—way back then, I started looking forward to the day when for a small fee you’d be able to watch the major tennis tournaments over three or four channels, all the matches you wanted to see, live and uninterrupted, all the way through. It seemed possible. I can’t say I remember hearing anyone mention the idea on-air but it always seemed reasonable to me. It still does—now more than ever, in fact, when “we” have thousands of channels to fill. But did it ever happen?

No. Even close? Not at all. Up until last year when the Tennis Channel lost its last pissing contest with my cable provider, I’d been paying an extra $6.95 per month for a very poor approximation of what the future should have been by now. When it got dropped I downgraded my subscription entirely to rock bottom. I figured I’d still get to watch a good many major matches on network TV, certainly the Grand Slam finals. Which felt sufficient. I’d already watched a lot of tennis in my life, now I was writing Famepunk and watching so little TV that the biggest part of my cable bill was for nothing. And of course I—“we”—had the internet now, representing the rest of my cable bill. The internet, an endless space for the storage of infinite archives and live feeds of matches, should be a paradise for tennis fans, much better than any cable TV. We can live in hope: at any time, professional tennis might turn an ideological corner and start sharing itself more freely with a huge and grateful international audience watching on-line.

But not watching Wimbledon—not in my house, anyway, thanks to the 12-year contract Wimbledon signed with ESPN last July for exclusive U.S. rights. This year I listened over internet radio from the Wimbledon website. In truth, I’ve gotten to enjoy tennis on the radio, starting back in January with Craig Gabriel at the Australian Open. Tennis and radio are a surprisingly good fit. Even so, nothing beats watching a match on TV with the sound down but I don’t want ESPN in my house again, especially not since they fired Joe Morgan from Sunday night baseball. They’re venal, they’re idiots, they’re pimps for big management agencies, they’re the reason cable television costs so much: this is ESPN, owned by Disney. 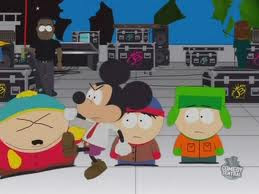 Which also owns ABC so when the finals were finally broadcast on their respective afternoons, it was the ESPN feed from the morning that played. I don’t like getting trapped with ESPN’s garbage whether I buy it or not and I didn’t even watch the women’s match. I’d have watched on-line but Wimbledon posts no matches on its own tournament website because exclusive means exclusive: it sold all its rights, strapped for cash, Wimbledon, with its big new retractable roof on top of five long years paying equal prize money to women. How fortuitous was that roof installation, though, because now the start of the big-ticket Centre Court matches can be timed to the minute and ESPN can stick to the schedule, it works out so well—if not for bottom-tier customers like me, then presumably for large numbers of other people who matter more because they’re paying more and also getting more—more in this case being many hours and even multiple channels of actual live tennis, as Wimbledon says it wanted. Needless to say, desperately poor as it is Wimbledon couldn’t simply start broadcasting matches live to anyone with a web browser: even if it charged a fee, Wimbledon couldn’t afford to make that kind of choice. This isn’t some utopia where $480 million doesn’t rate picking up off the floor, not when you’re just an itty-bitty old lawn tennis club stuck in the super-expensive capital city of a dead empire. It’s a big change for me, not watching Wimbledon, but I’ve got twelve more years to get used to it.
Posted by Me