Where it came from

Since childhood I’ve always been a great big televised tennis fan. To date myself, my first great loves were Bjorn Borg and Harold Solomon. Then, when I was in high school, I caught a glimpse of Hana Mandlikova winning the French Open title and my focus shifted towards the women’s game. 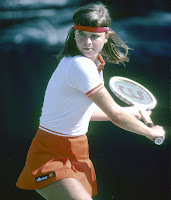 I was in my 30s before I attended my second professional match; instead, as much as I could I always followed from home, on television. The broadcast paradigm hasn’t changed. Every two games and at the close of each set there I’d be, sitting through thirty years of commercials for Jaguars I’d never drive and financial services I’d never earn enough to need, triumphal messages from big oil and IBM, athletes peddling swag or dripping Gatorade in slow motion—this hasn’t changed: the same commercial blocks remain fixed in frequent rotation over a whole match, a whole weekend, a whole tournament. In response, I tuned out. I developed or dug out a fantasy world into which I would slip during the pauses, a pleasant underworld where the women’s tennis action continued at a hectic, hugely entertaining pace. I made up fantasy matches. On the one side of the net would be a famous player, someone real. On the other side, a Jewish girl with dark hair and charisma, a balletic trickster, a showboating American troublemaker—a fictional self-projection although I’m not Jewish and I’ve played tennis very little, never well. I had other alter-egos. I’ve also produced ten million cubic tons of obsessive dead-end romantic daydreams—not to boast, but this on top of an active creative life coexisting with various day jobs. Still, over the course of the decades the scenes I pictured between this character and the “other” great players of “her” day (which stretched longer and longer) grew into a fairly detailed story cycle with which I entertained myself during commercials and other odd, idle hours off and on across the year, and always during Grand Slam tournaments.

On Labor Day weekend in 2010, I was casting about for my next big writing project. The previous year I’d published a book of short poems and a short, off-putting novel. Since then I’d been keeping a blog about reading Victor Hugo’s Les Misérables at work, but I’d almost reached the end. I was sitting at home on my sofa, drafting a blog entry, with the US Open going on television. I started to write about the gigantic quantity of hours I’d wasted—wasted—on daydreams about my made-up tennis player. But then I thought, Maybe not. After a little while, quite tentatively, I started making a list of characters: a sort of key, with the initials of the real-life player-models followed by their new fictional names. Then I started writing, basically transcribing a voice that had started near the end of the story before doubling back to the opening scene. I kept going. Writing at length has always been a struggle for me although I love to do it, I love the re-reading, so I was genuinely surprised at how quickly my notebook pages were filling with prose fiction—and not only in sequence, but in patches. Dialogues and scenes from what I recognized had to be later volumes were presenting themselves, pressing forward, mapping a long journey, it was obvious.

Strangest of all was how quickly the new fiction devoured and digested the original tennis daydream, which is gone, along with a few others. In the battle over my mental economy, this book won. As Famepunk (the title came to me later) it arrived with its own major plot points and story arc in which I recognize scattered old fantasy elements embedded in mostly and mysteriously new material: the combination crystallized at the moment of exposure. It’s very strange, but I’m left thankful to have discovered a life’s work ahead of me, I feel I really caught a wave. I give a lot of credit to Victor Hugo. Four months in, I was through with the first draft of US Open 1987, the not-short first volume, and was already writing the second, which I’ve called Middlemarch. Now it’s finished, too, and in keeping with the title, it’s long. It’s also filled with love and sex between talented teenaged girl athletes. I’ve got a few kind people reading this one in its final draft before I move ahead with wider publication next month; meanwhile I’m making final edits. But I like to keep busy—and there is a first volume out there for sale. So I’m opening this blog for curious readers who’d like to know more than a searchable product description can tell.
Posted by Me