Difficult to Categorize | 7 | Have I Transgressed?

Practically at the very moment of release from my strangulating 6-month Kindle Select exclusive, I finally published the Smashwords edition of Middlemarch. Which means that in a few more days it will be available for iPads and Nooks and phones and everything—digital saturation. I’ve been all over the Kindle Direct Publishing site and the Smashwords dashboard among the files at my accounts doing this. I’ve checked the sales data. I haven’t made any sales at all.

But I persevere! After two weeks of tinkering I’m finally happy again with the front page of my web site. I’m content to stop, despite the dead javascript in Her Attractive Pain and Cloak which I just don’t know how to fix (and it’s still alive in Explorer). My work so far is there, the best I could do at the time. Of course it’s not everything. I’ve got cartons of writing on paper. Lots of the old stuff is on typing paper—typed!—and a great deal else (including a novel) printed from files stored inaccessibly throughout a deep wooden desk drawer full of different-sized disks; I’ve got hardware to match piled in corners and closets, busted and unsupported. To put more old work on-line, I’ll have to re-type it.
﻿
In early 2001, when I could still open some of those old files, I converted two of them into web projects to build out RIP-TV beyond the diaryland site. An episodic autobiographical piece about my luck (bad) with women, One and Others was written and pieced together over the course of many years. The web version is the first complete one; it’s organized around several views of a painting of my sister’s that I keep above my desk. The title is stolen from a small-scale wooden sculpture by Louise Bourgeois that I first saw with my after-college girlfriend (who’s in the story) at MoMA in the 1982 one-woman retrospective, an unforgettable show. Not long ago I saw One and Others again, it’s on Madison Avenue in the Whitney’s permanent collection, near the bathrooms; I recognized it right away coming out. In tribute to its undimmed allure, I’ve replaced the Soviet work propaganda that I’ve been using as the linking “tile” at RIP-TV with a photo of the thing itself.
﻿ 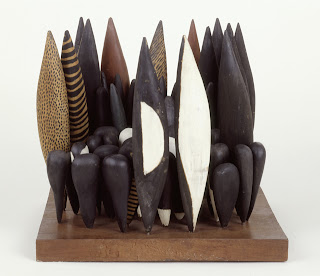 The site’s other pre-digital story, Girls School, I wrote start to finish in the fall of 1995 as my contribution to a lesbian writing workshop I was taking with nice lesbian friends in Central Square, Cambridge. It was composed under the influence of a cover-to-cover Columbus Day weekend reading of Harold Bloom’s The Western Canon that I did on my own. Which (the Western canon, especially Macbeth) remains to me what Girls School is about, although it is a lesbian porno climaxing in a sex ritual. I did a serial on-line publication, each installment illustrated with a collage made from an image in the Taschen paperback 1000 Nudes. For years I’ve had the finished version linked to a lesbian pair study from the same source with a Constructivist graphic cut into one of the bodies, an image I consider ample warning; I’ve kept and cropped it for the latest front page design. 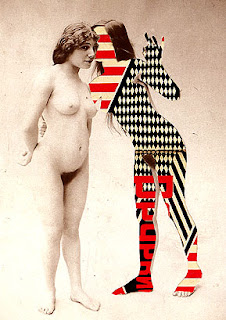 May 2013 and I’ve had those two stories on my web page which I’ve shared widely for over a decade; I always put my web page address on my business resume, too. But somehow until recently I thought So what? about that. I wasn't unaware of how I was outing myself, but I was indifferent. The lesbian thing wasn’t really my focus; I was interested in writing in different voices and crafting hypertexts and creating on-screen beauty. In my work the lesbianism was content, it was just one type of subject matter among many contributing to the flow of words: this is how I saw it. Maybe writing Middlemarch changed me—anyhow my point of view has changed. The lesbianism looks extremely significant to me at the present time. Of course I’ve always realized that vast numbers of people can’t tolerate lesbians at all, not even the marrying child-rearing kind and certainly not the sex ritual enacting kind. I don’t care at all about these people’s feelings, but being more aware of them makes me care more about lesbians. I want to support and encourage lesbians in their lesbianism through an offering of literature. I hope it helps.
﻿ 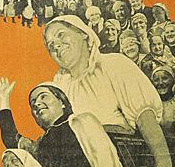 So at last I’m posting Middlemarch on Smashwords, and here comes the category choice. In support of lesbianism I go with Fiction—Gay & Lesbian—Lesbian for the primary listing and Fiction—Historical—USA for the back-up. Literary Fiction I passed by, as planned; Women’s Fiction tempted me, Women’s Fiction—Feminist tempted me. The category that sounded most fitting, I didn’t choose either: Fiction—Literature—Transgressional. But the first time I saw that category, it seemed to flash.

It felt almost too fitting. What doesn't Famepunk Part 2: Middlemarch transgress? Look what it does to the historical record, for starters! Crossing lines everywhere, crossing all the lines, violating all the boundaries, walking into lines of nightsticks on every hand: my book does this with its tits out. It’s ridiculously transgressive. I mused. Transgressional: maybe these are my people.
﻿
Then I thought, Hey, wait a minute. What’s with Transgressional? What happened to Subversive? So I looked and there’s no category line for Fiction—Literature—Subversive or for anything Subversive. That category—a genuine category, one of long standing and high repute in many circles, historically important circles—is gone, it’s missing; Subversive is history. To say, I have set out to undermine a faulty structure and help to bring it down isn’t the choice now. Instead, I transgress: the focus of agency shifts from the structure to the property lines, from cores to boundaries, from danger to nuisance, naughtiness. Why should this be? Subversive is maybe passé, too blunt and opinionated, too butch, too innocent, maybe; Transgressional offers the almost to subversive’s too much for the sensitive 21st-century ear. Maybe this is the thinking, that Subversive has evolved, that it’s gained self-awareness and done some re-branding and now it’s Transgressional. Its politics informed by psychology, recognizing protest as neurotic symptom, it prods the reasonable walls until they bite.

I’d have loved to label Fampunk as subversive literature (which it might be) and fight it out with the competitive anarchists and would-be Kaczynskis for a readership.
Posted by Me No comments: