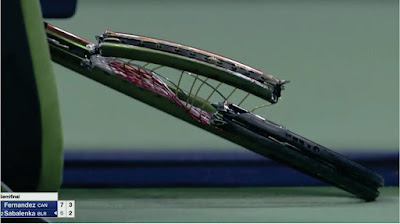 The women’s game had a bad reputation, in truth, because every few years since the First World War some teenaged girl would come along out of nowhere to beat all the established players back into historical footnotes—as if they hadn’t been playing the game properly, not for a while; as if they’d been subjecting the public to a charade with their cough-cough married lady patty-caking back and forth at one another; when some of these girls were so exceedingly young and they just beat everybody. It was difficult for women such as Cookie Toms who desperately wanted respect with a capital R to gain any traction in its pursuit because women’s tennis just didn’t look good to a great many people.

But Cookie and her band of like-minded players had persevered and prevailed.

This is from Middlemarch, Part 2 of Famepunk--a story which is looking very forward-looking, to say the least, today, when an virtually unknown qualifier still in her teens has just won the women's singles final at the US Open. In fact, the women's draw in the other half was wiped out by a hungry teen, too. 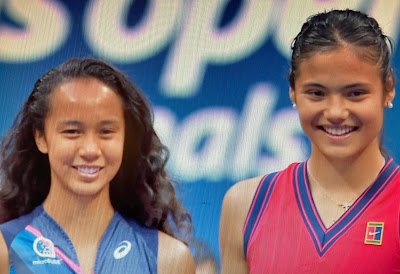 Congratulations to Emma Raducanu (above, right), and to her worthy opponent, 19 year-old Leyla Fernandez, who won many hearts with her valiant play this tournament.

In Emma Jasohn, the heroine of Famepunk, I'm proud to have created a champion who paved the way in fiction for a player to go from qualifier to trophy-holder in three weeks at Queens; in real life, it had never been done until now.

What will come true next? Read the books and find out before it happens.

But back to Cookie Toms and her band of like-minded players: this follows history pretty closely, and is modeled on "The Nine" who rebelled against women's second-class citizenship in professional tennis by starting their own association and tour, which Virginia Slims cigarettes sponsored. Fifty years later, what's now the WTA swims in money. Billie Jean King, model for Cookie Toms and like her the greatest of all champions, continues to deserve all accolades; and the sponsorships are still looking very suspect. A video tribute to The Nine, shown between Thursday's two women's semifinals, looked like this to those watching in the stadium and at home: 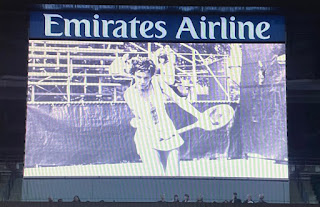 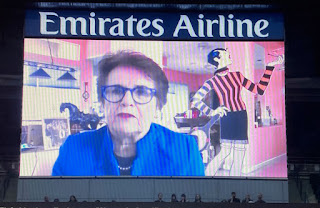 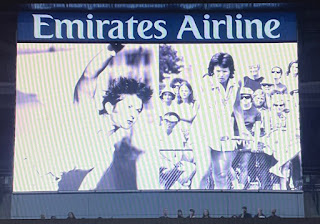 To be fair, in Dubai and (most of) the UAE, though their skirts had better reach the knee and spaghetti straps will not be tolerated, women are not required to cover their heads or faces in public.

So Fly There Today!